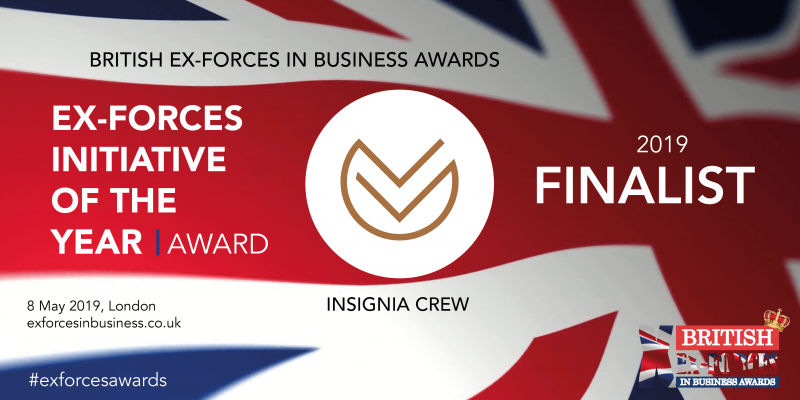 Insignia Crew – a selected finalist for the ‘Initiative of the Year’ British Ex-Forces in Business 2019 award!

We are delighted to announce that Insignia Crew have been shortlisted for the 2019 British Ex-Forces in Business, Initiative of the Year award.  Finalists for all categories were whittled down from more than 400 nominations that demonstrated outstanding business achievements enabled by transferable skills gained in the military.

The British Ex-Forces in Business Awards is the largest celebration and recognition of ex-military personnel in the UK workforce, and the employers that support current and former members of the British Armed Forces.

Servicemen and women spend years adapting to roles and gaining valuable skills. They develop qualities that are hugely adaptable to commercial environments and in demand in the business world, but communicating the transferability of those skills to employers can be challenging. Increasing visibility of role models – military veterans who have carved out successful second careers – is crucial to not only empowering and inspiring current and future service leavers, but to educating employers on the value of supporting the transition of servicemen and women.

The British Ex-Forces in Business Awards is the flagship platform for providing that visibility on a national scale by celebrating the achievements of veterans in the wider UK workforce and promoting the strong synergies between military values and business excellence. The awards highlight the military-gained skills and qualities that have helped enable their business achievements and recognises the organisations that have supported them.

This exciting, high-profile ceremony not only gathers business leaders and veterans to honour the winners, but also brings together top companies, key military personnel, politicians, journalists and other stakeholders to advance dialogue and share best practice around the benefits of ex-forces employment initiatives, and ultimately promote the significant value that military-gained skills can provide to the British economy if better utilised across the workforce.

My 6 yr old loves supercars. He has a particular f

Great to be back in London town meeting clients an

HTTP Error. Unable to connect to the Instagram API. Feed will not update.